Amanda McFarland and her sponsor the Rev. Dr. Sheldon Jackson first stepped ashore at the village of Fort Wrangel on August 10, 1877, just two days before Amanda’s 45th birthday. If she had not been a mature Christian she probably would have gotten right on the next boat south and gone back to Portland. She found that she would be the lone white woman in a lawless goldrush town. Fort Wrangel was recently closed and the only representative of law and order was a commissioner of customs. Moreover, the only available building was an empty dance hall which would be reclaimed when the miners came down the Stikine River from the Cassiar mines in October. For more than a year she served as the minister to the small settlement.

Amanda soon learned that she would have to contend with the evils of slavery and witchcraft. Rev. S. Hall Young wrote that Fort Wrangel had forty Indian slaves in 1878 and about 100 persons were killed as witches that year. She quickly won the trust of the native Alaskans, and the Indians turned to her for advice on spiritual, legal, and medical matters. She once presided over an Indian constitutional convention.

Amanda was undaunted, so Sheldon Jackson arranged for the dance hall, gave her ten dollars, and hurried back to the East Coast to plead for funds for the Alaska mission. It was not in the budget and he had to sell the idea to the mission board. Some were horrified that he had left a lone woman in such a hostile environment.

Because of a jurisdictional dispute, Amanda did not receive a dollar of salary for a whole year. She stayed in Fort Wrangel because her heart had gone out to a small band of forty Christian Indians who had welcomed her with great joy as their teacher and spiritual leader. They had been converted by a young Canadian Indian, Philip McKay, who with friends had a government contract to cut wood for Fort Wrangel. Philip’s Indian name was “Clah.” His interpreter was Mrs. Sarah Dickinson, an Indian woman who had married a white man. When the fort closed, Philip, though barely literate and ill with tuberculosis, stayed on to shepherd the little flock.

Amanda opened her school in the dance hall with about thirty pupils, with the Indian woman as interpreter. The number soon grew to 94. Her only supplies were four Bibles, four hymnals, three primers, thirteen first readers and a wall chart. Amanda wrote to Sheldon Jackson on December 10, 1877:

I never loved a school so well. Today I had 74 Indians crowded into that little room, but there was no confusion, but perfect obedience and order. But there is so much to be done (Philip was on his deathbed and could no longer do the preaching). I try to do everything I can, but feel every day that I must leave much undone.

Amanda was soon offered a better job at Sitka with twice the pay, a house, and her winter’s wood supply, if she would teach a few white children. She declined because her heart went out to the young Indian girls being sold into prostitution. She wrote to Sheldon Jackson:

Last week Mr. X went to the parents of my favorite scholar, a bright little girl of 13, and actually bought her for twenty blankets. I determined to rescue her, as she was taken by force, begging and crying not to go. I succeeded in getting her away and her mother promised to keep her at home. But I fear for her. Every day I feel more and more the need of a home for girls. This week I rescued one of my girls, age 11, from a white man on the street who was trying to get her to go to his house. Oh, if the Christian women in the East could see these things as I do, they would feel the importance of such a work here among our poor sisters.

When her stirring letters were published in church circles in the East she did get the home for girls she had asked for.

Amanda was delighted with the arrival of the Reverend Young, too, who soon married a teacher from Sitka, Fannie Kellogg. Fannie helped with Amanda’s new home school built in 1880. Amanda’s fame had spread throughout southeast Alaska and the school now had more applicants than could be accepted. Then came the dreadful shock of fire which destroyed the school in February 1883. No lives were lost but forty children had to run out into the snow.

Instead of rebuilding, the board sent Amanda to Sitka with as many pupils as wished to go. At Sitka, she became matron of the girls’ dormitory which she loved. However, her troubles were not over. According to Sheldon Jackson’s report of 1886 to the Secretary of the Interior, the newly appointed attorney general and others at Sitka were opposed to the mission school’s grant of land and stirred up Indian opposition to the school. Parents withdrew about half the pupils and rumors were spread that the matron was a witch, after a girl died of pneumonia. Even Sheldon Jackson was jailed for a short time.

In 1886, Amanda was asked to manage a new industrial boarding school at Howkan, the largest Haida Indian settlement. It was on an island about fifty miles west of Ketchikan. Howkan was later named “Jackson” and combined with two other villages to form the present Hydaburg. Here Amanda McFarland mothered, trained, and inspired the Indian young people for eleven years until her retirement in 1897 at the age of 65. She had given twenty fruitful years to Alaska: six at Fort Wrangel, two at Sitka, and twelve at Howkan.

Born Amanda Reed on August 12, 1832 in Fairmont, Virginia, (later West Virginia when it became a separate state in 1863 during the Civil War), she was one of thirteen children born into a strong Christian family which produced several missionaries. Her father was a “river man” who died of blood poisoning following an accident in which his leg was caught between two logs. Fairmont was located in a coal mining district near the Pennsylvania and Ohio borders. Amanda did not have to travel far to attend the distinguished female seminary in Steubenville, Ohio.

After graduation, she taught school in the Ohio Valley until at the age of 25 Amanda married the Rev. Dr. David McFarland, eleven years her senior. Immediately after the wedding in her home church, the couple left for Illinois. In 1866, after about ten years of preaching and teaching in Illinois, the Presbyterian board of missions asked the McFarlands to pioneer a mission at Santa Fe in the Catholic stronghold of the Territory of New Mexico. Other Protestant denominations had tried and failed.

Amanda’s family and friends were strongly opposed to her going to the wild frontier by a two and one half-week stagecoach journey through Indian country and no house at journey’s end. Her husband also thought it best to go ahead and scout out the land. So Amanda stayed with her family in Fairmont for the winter.

Dr. McFarland accomplished a great deal in the seven months before Amanda joined him. Aided by the Territorial Governor’s wife, Mrs. Jennie Mitchell, the Rev. McFarland held the first Presbyterian service in the Council Chambers of the Palace of the governors in Santa Fe on Sunday, November 25, 1866, with 40 present, followed by Sabbath School in the afternoon. On December 10, 1866, he opened a school with ten scholars. On a snowy Sunday, January 6, 1867, the church, the oldest Protestant Church in New Mexico, was organized with 12 members, only 3 of whom were Presbyterian, and a Board of Trustees was elected which included Gov. Mitchell, Chief Justice Slough, a pallbearer at President Lincoln’s funeral, the Postmaster, a Colonel of Ft. Marcy, and a promising young lawyer named Elkin. On March 4 of the same year, the Session purchased two acres of land at a Sheriff’s sale and a 3-room house. Amanda arrived in Santa Fe in May, 1867 with forty pounds of baggage.

A year later, September 11, 1868, David and Amanda’s only child, Harry Fulton, age 7 months, died of cholera. Amanda had a wealth of mother love to lavish on other people’s children and kept twelve of them in her own home. On December 14, 1868, the Presbytery of Santa Fe, Synod of Kansas, was organized. The church was visited by Sheldon Jackson, who made a glowing report of the progress of the Church and School.

After eight years and a successful ministry at Santa Fe, her husband’s health broke and they spent two years in San Diego, California. Feeling better, he begged to return to the mission field, and they were sent to the Nez Perce Indians in Idaho. There the Rev. David McFarland died of cancer on May 13, 1876. Amanda, now doubly bereaved, went to be near friends in Portland, Oregon. There, Dr. Sheldon Jackson met her and asked her to go to Fort Wrangel.

In 1898 at the age of 65, Amanda McFarland retired to Oklahoma and then to Fairmont, West Virginia, where she lived with her brother and died at the age of 80. She always spoke and wrote on behalf of Alaska missions. Sheldon Jackson said of her: All of the perplexities political, religious, physical, and moral of the Indian population were brought to her. Her fame spread far and wide among the tribes. Since the Tlingit Indian society was matrilineal, Amanda McFarland had status as a woman – an advantage at the time of her most famous and daring exploit…

At Fort Wrangel, two of her female pupils disappeared from school. Word was brought to Mrs. McFarland that they had been accused of witchcraft and were being tortured. Amanda set out to rescue them. Her pupils implored her not to go. “They are having a devil dance and will kill you!” Sarah Dickinson, the interpreter, threw her arms around Amanda and, weeping, declared she was going to her death.

But up the beach alone marched the Christian teacher to where her two poor girls were stripped naked with hands and feet tied behind their backs, in the center of fifty frantic dancing fiends who, with yells, cut the victims with knives and tore out pieces of their flesh. Forcing her way to the side of the captives, Mrs. McFarland stood warning and pleading, and threatening them with the wrath of the United States gunboat, and after hours of dauntless persistency, cowed the wretches and took away the half-dead girls. (During the night, one of them was recaptured and killed.)

In 1878, a male minister arrived at Fort Wrangel and took over many of McFarland’s official duties. Until her death in 1912 at the age of 80, McFarland remained an immensely influential woman within both the White and Native American communities of southern Alaska. She would later be called “Alaska’s Courageous Missionary.” 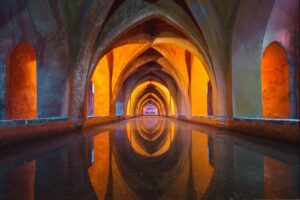 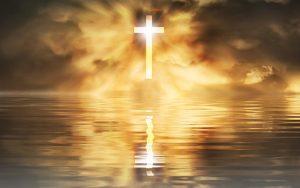