“The Ministry of Foreign Affairs advises all US citizens to leave Ukraine immediately. The likelihood of new attacks on civilian areas is high. The Samaritan’s Purse remains in Ukraine,” Franklin Graham, the head of the organization, wrote on Facebook. “We have already helped more than 4 million Ukrainians with food and medical care. We buy products from Europe and bring them to the country – about 75 trucks a week. We then distribute them in 10 kg bags through our network of churches across the country. So we have already distributed 22,500 tons of food. All this is possible thanks to faithful people who prayed and helped in the name of Jesus.

“Winter is fast approaching in Ukraine and things are getting worse and worse. The need for food, shelter and warmth is even greater. We plan to buy small wood-burning stoves and distribute them to people, send durable plastic to cover broken windows and holes in roofs. People should be fed and kept warm,” wrote Franklin Graham. “Let us pray for a quick end to this deadly conflict so that people on both sides can live in peace.”

On February 24, Russia launched a full-scale war against Ukraine.

As early as March 1, the “Samaritan’s Purse” foundation mobilized its capabilities, especially volunteers and sent disaster relief teams to Poland, Romania and Moldova to deploy places to help refugees and the wounded from Ukraine.

By mid-March, Samaritan’s Purse had established a mobile hospital in Lviv. During these six months of war, Franklin Graham came to Ukraine twice.

Archbishop of Canterbury: Russian invasion of Ukraine ‘opened the gates of hell’ 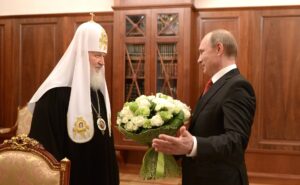 Patriarch Kirill called Russia the pillar and foundation of the truth